At Mark III Construction we pride ourselves on growing our own. Those who have grit and determination will have the ability to climb. Jack McKnight, multi-trade project manager and 2020 winner of Mark III’s Power of One award, is a prime example. 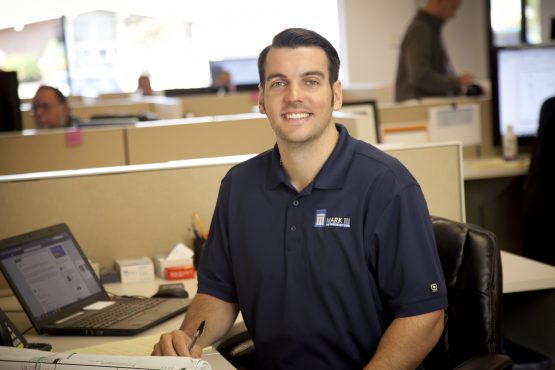 Jack’s career at Mark III began six years ago in our service department. After one and a half years in service business development, Jack transitioned to the construction side of the business, and so began his role as a mechanical project engineer. This new position gave Jack the opportunity to learn the construction side of the business and over the following years take on new and larger projects. “My projects became more complex and challenging but I haven’t looked back since.” McKnight said. He continued to take on more projects as mechanical project engineer, specifically in the healthcare and food industries.

Mark III houses all trades under one roof: electrical, mechanical, plumbing, metal-stud framing, and utilities. This wide range of trades not only ensures our customers have a single point of contact for their projects, but also gives our team the opportunity to develop and grow their career across all trades. Our vertically integrated approach and constant cross pollination of trades gives our team the opportunity to grow in different areas of work, setting us apart from other construction companies in both our services and career opportunities for our team.

After running large mechanical projects alongside other Mark III utilities and electrical project managers, Jack had enough knowledge to start running projects solo as the multi-trade project manager. “When running multiple trades, I had the opportunity to learn the technical side of each trade,” McKnight said. Jack was learning about electrical material procurement and managing project schedules in tandem. Make no mistake, Jack is the key driver in initiating and seeking out the opportunities that have led to his success, he is one to raise his hand to learn or take on more.

CHOMP was the first multi-trade project where he managed both electrical and mechanical. He also took on electrical work for Yountville VA Hospital. When Jack didn’t have the technical answer, he relied on his team and the subject matter experts to provide a technical solution. It is Jack’s responsibility as project manager to ensure the team has the tools they need to be successful and execute the project scope accurately and efficiently.

After six years with Mark III and a portfolio of projects totaling $28 million in contract value, Jack has grown as both a leader and a project manager. Here’s some advice from Jack: “Be present with the team on the job-site. Divide and conquer.”

Does this sound like a team you want to be apart of? Check out our open positions and apply today!